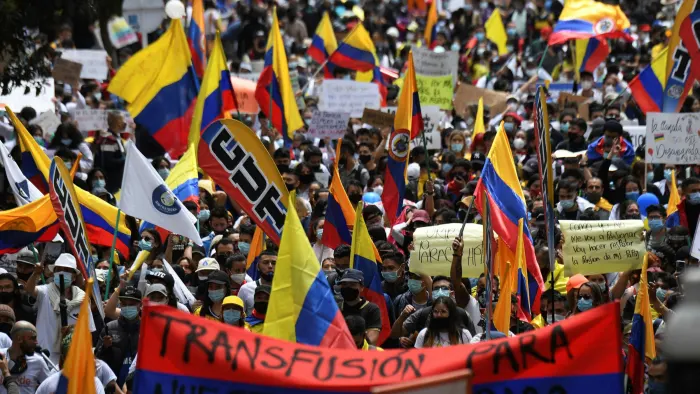 Seems as though protests in South America have become increasingly more common due to the fascist-like government installed in this nation. First of which was Chile with their protests against the government over the constitution (which turned violent pretty quickly), but now even more violent are the protests in Colombia.

Protests started exploding everywhere around the country near the end of April. According to the Rights groups of “Temblores” and “Indepaz” they have  “…counted 39 alleged police killings, over 900 arbitrary detentions, and 12 sexual assaults allegedly committed by police.”

There were protests before the pandemic in 2019 that tackled the event of the 2016 Peace Accords in Colombia which had promises of addressing rural inequalities and social development. It is believed that the protests happening in 2021 is a continuation of what was left off before the pandemic. Ivan Duque came into power in 2018 and completely cut off the funding of these peace accords leaving the poorer population of Colombia to fend for themselves.

Genevieve Glatsky is a freelance journalist writing for The New Humanitarian and she stated “The president had deployed military forces to help quash the demonstrations in several cities and told the Indigenous ‘minga’ protest group to “go back to their reservation.” For context, there have been Indigenous protests for their land to be returned to them in Colombia and they have participated in the protests, but they too have been killed by military forces.

Another aspect of the protests has been the corruption that has been initiated into the government for years. There are many things that ignited these protests as well, ranging from the pandemic to the years of the country being in debt and not being able to pay for basic programs for the people.

On May 12, 2021, for the first time since the protests erupted, protest leaders met with President Duque to come to an agreement but to no avail as there has been no agreement reached between the two sides. The protests will still rage on because of this circumstance because the people want to have equality as well as the gap between the rich and poor to deteriorate and to have programs funded for them that give them basic needs such as healthcare.

Carmen Sesin from NBC stated that “ Authorities in Cali said demonstrations are likely to extend their current peak in Covid-19 cases.” These protests are for the good of the people, but there will be some unfortunate repercussions because of it. The COVID cases in Colombia are aiming for a third peak in the upcoming weeks due to the low vaccination rates and the mass amount of people gathering for the protests.